Are you paying too much tax for your gas flaring? 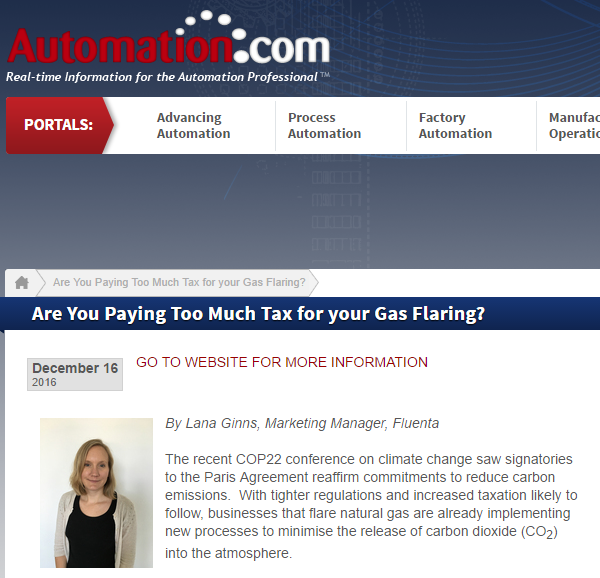 The recent COP22 conference on climate change saw signatories to the Paris Agreement reaffirm commitments to reduce carbon emissions.  With tighter regulations and increased taxation likely to follow, businesses that flare natural gas are already implementing new processes to minimise the release of carbon dioxide (CO2) into the atmosphere.

Many companies are looking for ways to minimise waste and therefore tax obligations by implementing new energy management processes.  Enhanced density monitoring (EDM) – automated subtraction of nitrogen from flare gas – enables businesses to maintain hydrocarbon measurement accuracy whilst adapting to emission-reduction processes such as nitrogen purging.  It will be one of the key technologies that organisations which flare natural gas will look at in the coming years.

Natural gas is a finite and valuable resource.  The most efficient operators are finding ways of re-using or capturing as much hydrocarbon gas as possible during operations.  If an operator can capture what was previously lost to the atmosphere, it can turn cost (hydrocarbon taxation) into revenue (sales of captured gas).

When processes are optimised, operators can often capture or reuse almost all associated natural gas.  However, the small amount of gas not used must still be flared, and flare lines must also stay open in case of emergency.  When natural gas is captured, reused or otherwise unavailable, another gas must take its place to maintain pressure and continuous velocity in the flare lines.

Nitrogen purging is the most effective way to ensure positive pipe pressure and continuous flow are maintained in a flare system.  If this is not maintained, the flare flame can be pulled inside the pipe, risking damage and explosion.

Many operators, particularly on North Sea platforms, are already limiting CO2 emissions through nitrogen purging.  Nitrogen is the fifth most abundant element in the universe and makes up 78 percent of the Earth’s atmosphere.  The gas is ideal for purging as it is neither difficult, nor expensive to source.  As a gas, nitrogen is colourless, odourless, and relatively inert.  It does not burn and when it is vented through flare lines with hydrocarbon gas, less CO2 is released into the Earth’s atmosphere compared with flaring hydrocarbons alone.

Companies need the ability to differentiate between flared hydrocarbon gases and nitrogen for nitrogen purging to be a cost-effective process.  If they cannot, the company will pay tax on the whole volume of gas released – both nitrogen (not taxable) and hydrocarbon (taxable).

While in some locations estimating hydrocarbon volumes during nitrogen purging is still acceptable, this is unlikely to remain the case in the coming years and many countries now require accurate measurement and reporting.  Nitrogen purging uses an automatically controlled valve system to input nitrogen and these systems are prone to error.  At any point during the purging process, nitrogen can be added or removed from the flare line unexpectedly.  Even if the line includes an accurate flow measurement device, this will only measure the volume of gas released, rather than its composition.  Operators can use EDM to ensure they are not paying tax for hydrocarbons they are not emitting.

Companies can apply EDM systems wherever they purge nitrogen through flare lines.  Operators set several ‘flaring scenarios’ based on variations in gas flow velocity and the EDM system differentiates between flaring and purging based on input data during the initial setup.  For example, an EDM system will assume that when flow velocity falls below a certain threshold the line is in ‘purge mode’ and part of the gas composition is nitrogen.

The EDM process differentiates between the nitrogen and hydrocarbon, assessing whether it has deviated from the expected value, by measuring sound velocity.  If the measured value is different to the expected value, this is an indication that the gas composition has changed and the operator may be flaring an unexpected volume of hydrocarbon gas.  When the velocity threshold is exceeded the EDM system knows the operation is routine flaring and will not try to calculate nitrogen content.  EDM does not need a stable flare to work.  This allows operators to use EDM across all flaring environments and it could, for example, only be used in an emergency.

Real time gas composition measurements can be made automatically with EDM, even in non-stable flaring environments.  Information must be input during system setup – the expected hydrocarbon composition must be known in advance – so the EDM sound velocity algorithm can calculate the difference between expected and measured values.

Where actual gas composition is measured in real-time, expected EDM values can be updated in real-time.  This process is generally expensive and complicated, so the most effective method is to set specified flaring scenarios with expected gas composition in advance, and then update these manually.  The EDM process then provides accurate readings of hydrocarbon variations in real time.

The quality of the EDM algorithm output depends on the pre-defined values set during installation, but maintenance and composition updating is straightforward once installed.  For operators that purge with nitrogen, EDM provides a fast return-on-investment through more accurate emissions reporting and a reduction in taxation.

Momentum to reduce carbon emissions in industry is increasing.   However, while emissions from flaring are going down, regulations and tax obligations are increasing.  Companies are minimising waste but crucially – by implementing EDM – also have an opportunity to reduce their tax bill.

Operators that flare the least will get the most value from EDM.  Ironically, it is these operators that will get taxed incorrectly if the nitrogen they purge is not accurately subtracted from their flaring volumes.  As the world moves towards reducing gas flaring, EDM becomes increasingly important, ensuring companies are taxed correctly for the gas they are releasing.

This article first appeared on Automation.com