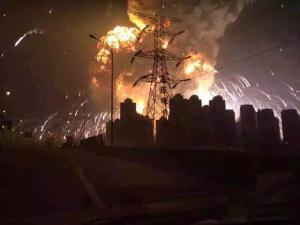 Government officials, emergency services and local residents gathered together to observe a moment of silence on Tuesday, to pay their respects to those who lost their life in an industrial accident that shocked the world.

On Wednesday the night of 12 August several explosions, one of which had the force of more than 20 tons of TNT, shook the Binhai district of Tianjin in China, the 10th largest port in the world.  Officials have said that the devastating blasts killed at least 114 people, including 12 firefighters.

The explosions, registered by the United States Geological Survey as seismic events, sent shockwaves through apartment blocks in a city inhabited by more than 15 million people.  Rescuers have found more than 50 people alive, yet 700 people were injured and thousands of local residents have been left homeless.

The explosion in Tianjin, and other recent accidents in the country, have exposed severe workplace safety problems in China.  The massive loss of life reinforces the critical need for accurate measurement and detection of gasses and chemicals in factories, refineries and other hazardous commercial environments.

Although the exact cause of the blasts at the chemical warehouse in Tianjin has not yet been established, explosions of the magnitude and intensity seen were more than likely fuelled by the ignition of hazardous chemicals stored on-site.

There are many potential causes of explosions on sites that use and store hazardous chemicals – the sudden release of materials under pressure, which can often result from on-site activities such as moving drums, or the introduction of an ignition source into an explosive or flammable environment.  Monitoring potentially explosive environments for the presence of flammable vapours is an important health and safety practice and should be supported by the use of accurate measuring equipment.

Accurate measurement of hazardous chemicals, both stored and in the air, is essential to ensure the safety of site workers and the wider community.  Chemicals are used extensively in industry and are the bedrock of many useful products we take for granted, such as paints, plastics, adhesives, detergents and pharmaceuticals.  Exercising caution in the usage, storage and measurement of such hazardous chemicals is critical.

← How much gas is flared and vented worldwide? No place for complacency in the oil and gas industry →