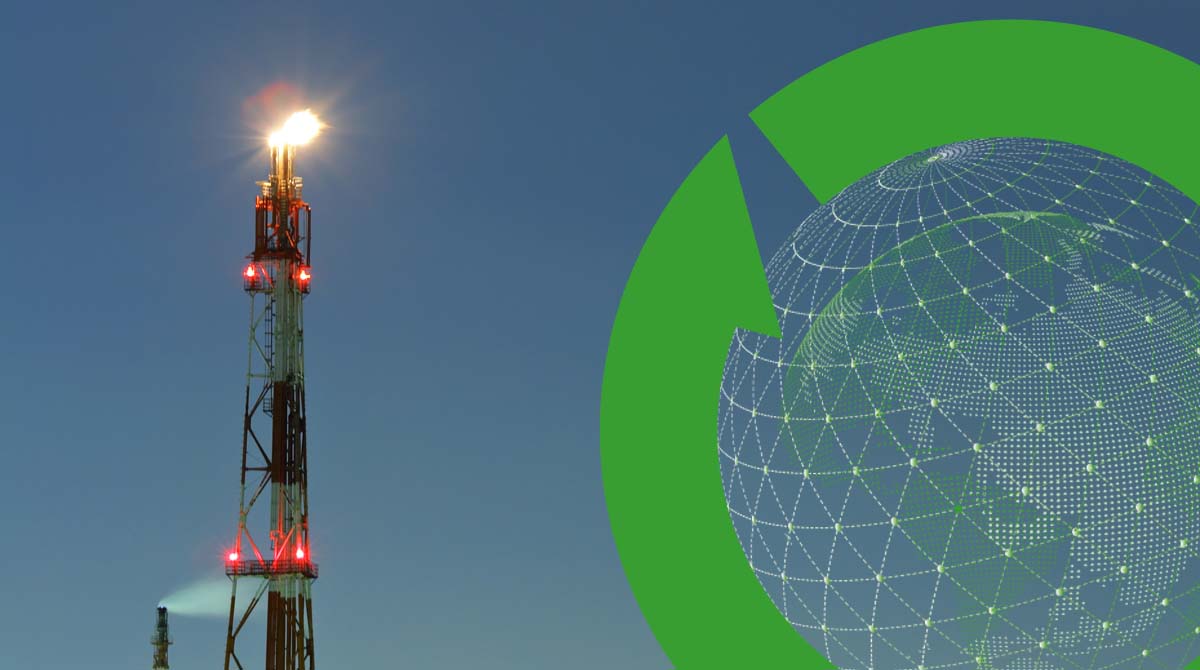 After the serious disruptions of 2020, the year 2021 was about returning to relative normality for most industries. Disruptions to oil and gas production due to COVID have coincided with COP26 and renewed calls for action to curb emissions as the world looks to achieve net-zero in the coming years.

Definitive flaring data for 2021 isyet to be published, however, this is our take on the state of flaring in 2021 and thoughts on the future of the industry.

What to expect from 2021’s gas flaring data

In 2020, we saw a drop in both global oil demand and flaring, however these decreases didn’t correspond. Although oil demand fell 7% from 2019, and production fell 8% according to the World Bank, flaring only dropped by 5%. This equated to a drop from 150bcm to 142bcm of gas flared from 2019 to 2020. Of this decline, the US accounted for 70%, having reduced their gas flaring by 32% partly by producing less oil and also through infrastructure investment to handle associated gas.

Overall, the 142bcm of natural gas flared in 2020 globally resulted in 265Mt of CO2 and nearly 8Mt of methane also being produced, according to the International Energy Agency.

For 2021, Russia, Iran, Iraq, the US, Algeria, Venezuela, and Nigeria are likely to remain the top seven countries for gas flaring for the ninth year running, producing 40% of the world’s oil but 65% of global gas flaring based on data from 2020. Among these seven, there remained great discrepancies in flare intensity, with Venezuela flaring more than 40m3 of gas per barrel of oil, whilst US flare intensity is only around 3m3 of gas per barrel of oil. We expect this trend to continue in 2021.

These variations in flare intensity indicate another problem when considering gas flaring. Although the total amount of flaring in 2020 fell, the overall intensity increased by 2.5% and has indeed increased over the past three years.

Considering this alongside the fact that oil demand and production both increased in 2021 compared to 2020, although they are still below 2019 levels, it is reasonable to assume that both the volume of gas flaring and the intensity increased during 2021 compared to 2020. In fact, in April 2021, Capterio predicted that gas flaring would likely increase by 6-9% due to oil recovery.

Companies’ and countries’ statements on flaring in 2021

Despite the absence of unified, specific action, several countries and companies have been taking steps themselves to tackle flaring. For example, in November 2021, PETRONAS joined the Zero Routine Flaring by 2030 Initiative, declaring that it would publish its first set of flaring data in 2023, whilst US shale producer APA Corp said that it had ended routine gas flaring at its US onshore operations in October 2021. It achieved this through investment in pipelines to transport gas away from basins, as well as compressors and connections to gas-gathering systems.

At the national level, Nigeria repeated commitments to end gas flaring. But there is scepticism over whether these will be met, given that they have consistently moved their deadlines for targets. Iraq, meanwhile, is confident that it will end gas flaring by 2027 thanks to partnerships with IOCs, whilst Libya has partnered with TotalEnergies to reduce flaring.

Russia, the top country for flaring worldwide, don’t appear to treat the subject as a priority. In addition to flaring, Gazprom, Russia’s state-owned energy corporation, often claim that leaks are unavoidable. Leaks and venting are two ways in which methane is released directly into the atmosphere, causing severe consequences on climate warming. In 2020, Gazprom announced they release enough methane to trap the same amount of heat as 25.5 million tons of CO2. Additionally, leaked gas affects operators’ mass balance and poses severe safety risks.

Regulations and their enforcement remain a central component of reducing gas flaring, and there have been cases of regulators taking action against operators. However, investment in infrastructure to limit unnecessary flaring has been shown to be effective from an environmental and financial perspective by operators in several parts of the world.

The environmental situation for 2022 and beyond

The probable flaring increase is not encouraging for the supporters of achieving net-zero by 2030, such as the companies, governments and institutions who have signed up to the Zero Routine Flaring by 2030 Initiative launched by the World Bank and United Nations in 2015.

COP26, which took place in November 2021, was a significant opportunity to address gas flaring, but very little – if anything – was done about it. Instead, the US government and others focused on methane emissions without specifically targeting flaring.

In December 2021, the European Union published a proposal to regulate methane emissions, which partly references flaring and its consequences. This proposal includes putting in place more restrictions on flaring to prevent all non-emergency flaring and introducing requirements for combustion efficiency and transparent reporting by operators and companies about flaring. In its draft green deal, the EU also published its intentions to further regulate methane emissions associated with imported oil and gas. The World Bank recognises that “when a country imports oil from another country, it also imports the flaring intensity of the producing country in proportion to the amount of oil imported.” We expect regulations to begin to take into account a new metric, IFG (Imported Flare Gas Index) to communicate how countries that import oil contribute to flaring.

In conclusion, it appears that after the brief reduction of gas flaring in 2020, 2021 will likely have resulted in an increase. Many countries have committed to reaching net-zero emissions in the coming years and to adapting their fields and equipment to minimise or completely remove routine flaring. However, their targets are still some years off, and many steps are still required to achieve them.

The commitments to reducing methane emissions from the US and China, whilst not directly targeting gas flaring, open the possibility of including some measures that will. The EU, meanwhile, looks likely to have more specific regulations in place. Although, routine flaring regulations are commonplace, we expect these existing policies to tighten alongside the introduction of  new ones where there currently are none.  It is also promising that the US is proposing new regulations to strengthen and broaden emissions reductions for new oil and gas facilities across America, including some 300,000 well sites.

Accurate measurement is at the heart of combatting harmful emissions as with measurement comes the ability to manage and change. At Fluenta, we predict flaring regulations to tighten in line with preventing a climate catastrophe. We have engineered our transducers to provide accurate measurement that exceeds regulatory requirements worldwide. We continue to develop new solutions to help operators achieve ambitious decarbonisation plans to reduce emissions and meet demands for energy transition.