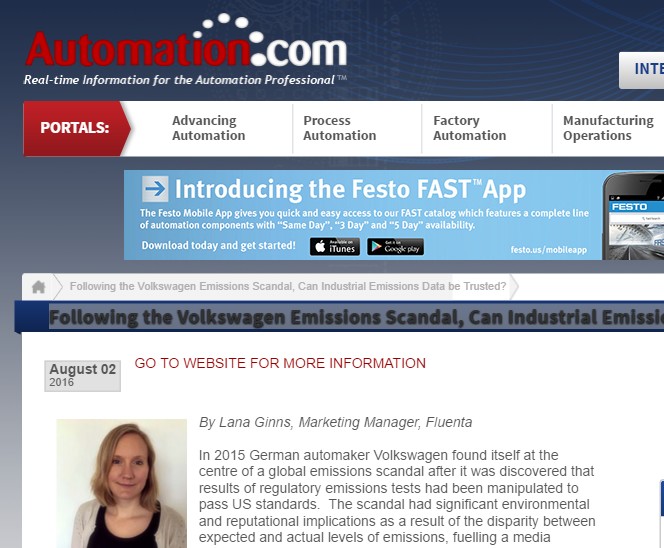 In 2015 German automaker Volkswagen found itself at the centre of a global emissions scandal after it was discovered that results of regulatory emissions tests had been manipulated to pass US standards.  The scandal had significant environmental and reputational implications as a result of the disparity between expected and actual levels of emissions, fuelling a media firestorm.

Volkswagen’s poor environmental culture contributed to its decision to take emissions tests with manipulative programming.  The Volkswagen scandal led to plummeting share prices and a damaged reputation, but the financial incentives that motivated Volkswagen are present in all industries – could a similar scandal occur in industrial emissions monitoring?

Why did the emissions scandal happen?

Volkswagen programmed turbocharged direct injection (TDI) diesel engines to activate certain emissions controls during laboratory testing.  This had a significant impact on the effectiveness of emissions control during normal operations, with 10 to 40 times more nitrogen oxide being released than standards permitted.

The carmaker was issued with a notice of violation of the Clean Air Act by the United States Environmental Protection Agency.  The number of affected vehicles was estimated at more than 11 million worldwide – more than 500,000 in the US, with models released from 2009 to 2015.  Volkswagen intentionally misreported emission levels for its financial benefit, but this was only possible because emissions are not measured during typical cycle, only when tested.

The role of the regulator

It is also important to consider the role of the regulator in supporting an industry-backed testing regime that does not reflect actual emissions.  The aim became to pass the test, rather than reduce emissions.  The automotive industry is regulated differently to other sectors and this is the main reason similar emission scandals are unlikely to occur in industrial emissions monitoring.  Discrepancies in testing rarely transpire because the risks are significantly lower.  There are countless independent operators in the field of industrial emissions, allowing the impact of isolated inaccuracies to be minimised on the industry’s overall position.  Industrial emissions are practiced and regulated with different motivations and as part of a collaborative culture that is distinctly more pro-environment.

Industrial emissions monitoring is not a fool proof process and there is still room for misreporting or regulatory imperfections.  Citizens could rightfully question the reliability of emissions data, for example where gas flaring emissions are estimated they may not reflect actual emissions, or where emission reporting is not automated or continuously monitored.

National Mass Inventories are declared based on the combination of emissions readings taken from plants that often only reflect emissions at one period of time.  These figures are multiplied to calculate emissions over time – no visibility is given to potential uncertainty or changes in volume.  Snapshots of data are used in Europe because there are limited requirements dictating when to apply continuous monitoring to industrial processes beyond Power and Incineration plants.  In the US, the legal requirement for operators to install flare gas meters within 120 days of the end of the month the operation’s average oil production exceeds 2,000 barrels per day means mass reporting is significantly more accurate.

With more organisations adopting continuous emission monitoring systems (CEMS) it is important that investment is protected by using reliable instrumentation that provides accurate data.  While still some way off the accuracy of mass reporting in the US, standards developed in Europe by Comité Europén de Normalisation (CEN) offer guidance in the calculation, estimation and measurement of industry emissions.  Through commitment to the regulatory regime supported by CEN, industrial emissions can be properly monitored and measured to ensure published data is consistently reliable.  By adhering to CEN guidelines, companies can avoid the reality of an emissions scandal and its damaging repercussions for business and the environment.

This article first appeared on Automation.com – click here to view.